We are here to help you, ask us!

Let us appraise your flat 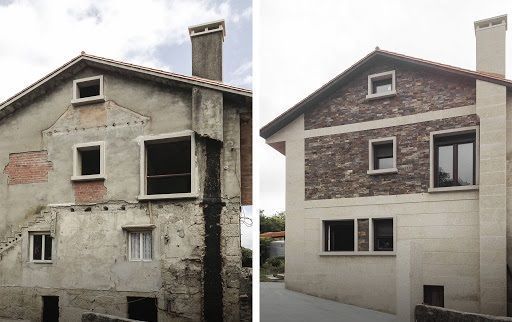 Reform a façade is one of the tasks that, before or next, touches to carry out at a home. Well for aesthetics or so that it was necessary to repair some crack or defect, the reforms at the façades are necessary each true time. Whether it treats of the of a house unifamiliar how of a flat at a bloc of homes, sooner or later touched to put at his reform. But then they arrive the doubts… what it is necessary to make before? which permissions need? how many money will cost me the reform? and how much the permissions? I have to request permission at the neighbours? when? The responses at all these doubt tea the showed at continuation. Like this will clear which steps have to give to reform the façade whether alive at a house unifamiliar or a flat. And at this last step, whether the reform is partial and only concerns your part of the façade as if it is of the general.

Reform a façade if the house is unifamiliar: permissions

If it treats of being a house unifamiliar, will not be necessary to pose of chord with any neighbour, except at the case that the home was at an urbanisation with other that they are equal and have a true uniformity. The same succeeix if the house is a xalet semi-detached or mated, at these cases it will be necessary to pose of chord with the houses that form part of the urbanisation or with the neighbour that has the home punched.

The following to reform a façade of a home unifamiliar is to achieve the necessary permissions to make it. First of all it is necessary to know that the licences of works for reforms have to request at the City council of the locality at which was the home. To commence, will have to solicit a licence of main work or one of minor work. Besides, you will have to pay a series of taxes, that will vary at function so much of the type of work and of other suppositions: occupancy of the public road, installation of containers, etc.

Main work or minor work is necessary to request?

The difference among main work and abstract minor. At a lot of cases depends of the that consider each city council. In general, it considers main work what implies reforms at which make changes of big importance at a house. For example, at his indoor distribution (join stays or create other new), at elements at his structure (terraces, balconies, roofs, etc). Also it is the licence at soliciting when make reforms at a venue to transform it at house.

Among these suppositions there is several that can refer at reforms at the façades, since the shutdowns until the reforms at balconies. Therefore, it is more that probable that it was the permission that toc request. Although if the work is not very complicated and only implies, for example, a hand of painting at the balcony, can be that it suffice with a licence of minor work. These are those that do not need in general that it pose a project for part of an architect or of a technical architect (at the main aye that it is necessary). They are simple, and generally only are related with the finish of some part of the home. For example, with his painting, with the renewal of the soil or with the tiled of the bath or the cuisine.

At this last case, the formalities at tracking do not require a lot of documentation. This aye, it is necessary to fill an application and present the estimate that the company or the professional that will commission of the work has wanted. The tax that will charge for the licence depends of the estimate, and uses to being a small percentage of this, that varies at function of the city council. Sometimes also it is necessary to contribute another documentation, like a plan of the reform or insurance of works, that will have to have valid the company commissioned of the reform.

At the case that have to solicit a certificate of main work, need also, apart from the estimate and another documentation related (insurances, certified of bastimentada, etc), a project of reform realised by an architect that commission in addition to the address of the work. If the façade at reforming needs a lot of rehabilitation or is of big envergadura to treat of a bloc of homes of a notable height, also use to require the kicks of a technical architect that commission of the address of the work. Besides, they will have to elaborate a survey on the security of the work, and on the effects that will at the health of workers and persons that are at his radius of act.

Which permissions need besides at a community of neighbours?

At other cases is not like this, and everything depends of if at the statutes of the community there is some point or section at which specify concrete conditions on finishes, maintenance of the uniformity of the façade, possibility to make shutdowns, if can make or no reforms at façades without requesting permission at the community, etc. If at them there is not nothing foreseen of mode expresses with regard to the reforms of façades, will not be necessary to request the permission except if it affects the final aesthetics of the façade. At this case aye that it will be necessary to request a permission, since at a lot of cases will require to solicit the permissions. Aye that it will be necessary to communicate in writing at the community the onset of the conformal works at the project of works and at the licences and request justifying of reception of the communication, as well as that it feature at records.

How much coast reform a façade regarding permissions?

In addition to crediting the price agreed of the reform, it is necessary to pay other costs how:

Of face at the costs of these permissions, it is necessary to have several aspects at bead. Generally, they charge several types of taxes:

Other news that may interest you:

They have illegally occupied my property

Nearly 100,000 homes have been illegally occupied in Spain. Next, we analyze what are the specific tools that the owner has to avoid the ‘squats’ and how to get rid of them as soon as possible.Specifically, the Express Eviction Law is a modification of the Civil Procedure Law that seeks …

We use cookies to ensure that we give the best user experience on our website. If you continue to use this site, we will assume that you agree.I agreeoLeer más